About the Review Conference

The Maputo Review Conference is a formal diplomatic meeting of the 161 States Parties to the Anti-Personnel Mine Ban Convention.

It will take place from 23-27 June at the Girassol Indy Congress Conference Centre in Maputo.

It has the potential to build upon the successes of the 2004 Nairobi Summit and the 2009 Cartagena Summit on a Mine-Free World by being one of the most important events since the Anti-Personnel Mine Ban Convention was opened for signature in December 1997.

The 2004 First Review Conference – the Nairobi Summit on a Mine-Free World – celebrated that, in its short history, the Convention had become the international community’s framework to pursue a conclusive end to the suffering caused by land mines. 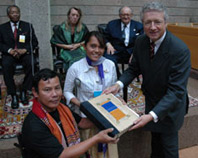 It was also made clear that the Convention’s States Parties were prepared to address remaining challenges, using their first review conference to look forward, adopting an action plan to guide our efforts during the period 2005-2009.

The 2009 Second Review Conference – the Cartagena Summit on a Mine-Free World – marked a decade of efforts to save lives.

It also made it clear that, notwithstanding tremendous progress, the suffering caused by anti-personnel mines was still not an issue of the past.

In addition, the Cartagena Summit emphasized that compliance with solemn obligations makes a difference and that as long as people remained at risk, we would do more to achieve our goal, spelling out our commitments in a second action plan.

The Maputo Review Conference will mark 15 years since the Convention entered into force:

The Convention is at a different stage than it was when it was adopted in 1997.

Significant progress has been made and lives have been saved. However, challenges remain and the Maputo Review Conference is the chance for the international community to regroup to deal with the realities of what remains at this point in time in the anti-landmines movement.